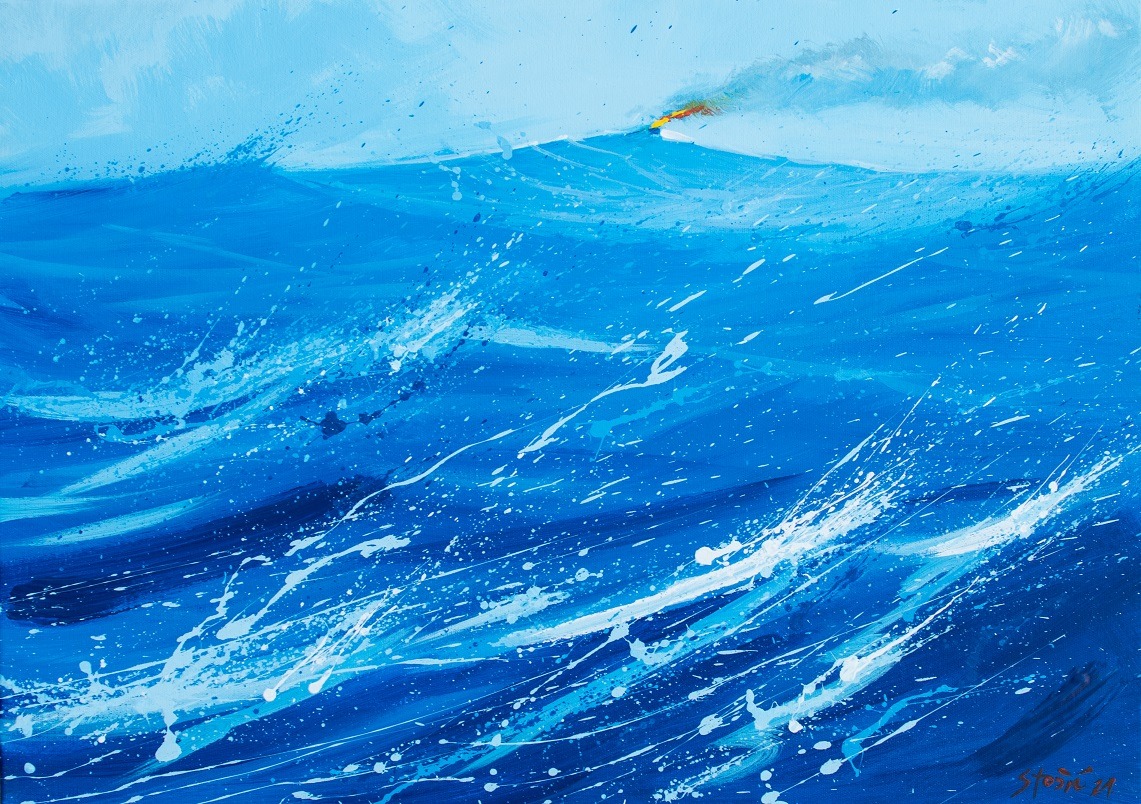 The enraged sea in Đorđe Stošić’s painting “Storm on the Sea”, without a lot of pepper, but with a lot of salt, with its blue color opposes any logic of the storm that foams it and tears it into a thousand drops. With the innocence of their whiteness, these drops sense a tragedy worthy of the most sublime Greek dramas. Despite the power of nature and the power that hides the sea, in the distance of the dark open sea and cobalt-blue night, a sailboat and a sailor on it, in part, fleeing, defying storms and conquering both her and the sea in the desire to survive. The crucifixion of the sails of the full wind, which keeps the sailboat sovereignly on the surface of the sea, testifies that this goal will be achieved. He will survive!

Just one small notch in the picture, a penetrating red brush stroke, boldly interpolated into the endless blue of the picture, disturbs that harmony of all shades of blue. A symbol of the spark of life, hope and goal, one quick stroke of the painter’s nerve, a proof of his passion and will, testifies to the wonder of life and the strength of human will to overcome death. This red counterpoint of the painting is the true signature of Stošić’s recent oeuvre, the alpha and omega of his character and painting. I would venture to say that the whole cycle of paintings presented in this exhibition is an allegory of the struggle of life and time over transience with a happy ending, and the joy that after twelve years of the artist’s silence and self-denial we welcomed a new, much desired exhibition.

We wonder if, due to the awareness of the rapid passage of time and life or his sparkling temperament, the artist from the calm, elegiac, hyperreal views of the coast we remember him and which required a meticulous, slow approach to the painting process, consciously grasped expressionism, lyrical minimalism of penetrating authenticity and strength. His painting is now fast and furious. He retained modernity and universality in condensing the impression, in simplifying or enriching the content expression with a slight note of humor and cynicism.

With his painting vocabulary, he remained traditional and classic, choosing motifs as before – motifs of the sea, storms, seagulls, lighthouses, sailors, or universal symbols of the coast that people love, simply perceive, accept and look forward to. The painter either simplifies the painting by choosing clean, tonally minimized surfaces of the composition’s background where he elegantly and refinedly focuses on only one radically, realistically painted seagull motif, which is stylistically related to his earlier works or goes to the other extreme. compositions and expressions of light and color dramatically extract their emotional world by revolving around motifs that celebrate life. Then the picture is fast-paced, all-encompassing, passionate. With quick strokes, the brush beats on the canvas, spraying it with color with great energy and zeal, while masterfully subduing both the color and the light of the image to its current mood. This color of his is always in the function of the light he creates without any analysis, impulsively, with the simplicity of his relations, just as he creates space with the value of his tones. As a born intimist, the artist knows how to keep the surfaces clean in a restrained scale of red or blue, and at the same time achieve the depth and special surrealism of space with their light values. With his painterly carelessness, the master of tonal colorism creates the impression of freedom and perfect ease of existence.

“Bonvivan” in thought and deed, and yet responsible, free and honest, the author who replaced the native Slavonian plains with the wastelands of the sea horizon by moving to Istrian Medulin, kept the breadth, sincerity and heart of the Slavonian soul who still seeks distant perspectives the horizon of the sea. Love for small things and views, so simple that the mastery is to extract an artistic experience from them, for Stošić is an intellectual game, pleasure and challenge that he does perfectly simply, elegantly, one might say, without any effort. He made coastal themes his ostentatious motif in an authentic style. It is simple, concrete and infallible. Iconographically speaking, to have your own painting attitude today, as before, means to have half of happy success in your hands. With his best works such as “Storm” or “Porer in the Twilight”, Stošić reached the other half. It is adorned with a layered spiritual structure, deeply intellectual with a wide range of sensibilities and knowledge, and yet so simple and pragmatic in artistic work, interwoven with a dose of humor and joy.

He is an artist who has spent his whole life doing small things to make them big and therein lies his strength and success! His horizons and sunsets, imbued with lyrical surrealism as if taken from a dream. They are a synthesis of his simple philosophy of life, which he shares with sincere joy with an audience that recognizes his authenticity and rewards it.

Djordje Stosic was born in 1960 in Semeljci. He finished primary and secondary school in Nova Gradiška. He enrolled at the Academy of Fine Arts in Zagreb in 1979, where he studied for another six years in the class of professors Đuro Seder, Raul Goldoni and Josip Bifel. In 1985 he transferred to the Academy of Fine Arts in Sarajevo in the class of Professor R. Tadić, where he graduated and has been working independently since 1986.
Since the 1990s, he has also lived in Medulin, where he works as a freelance artist and photographer.