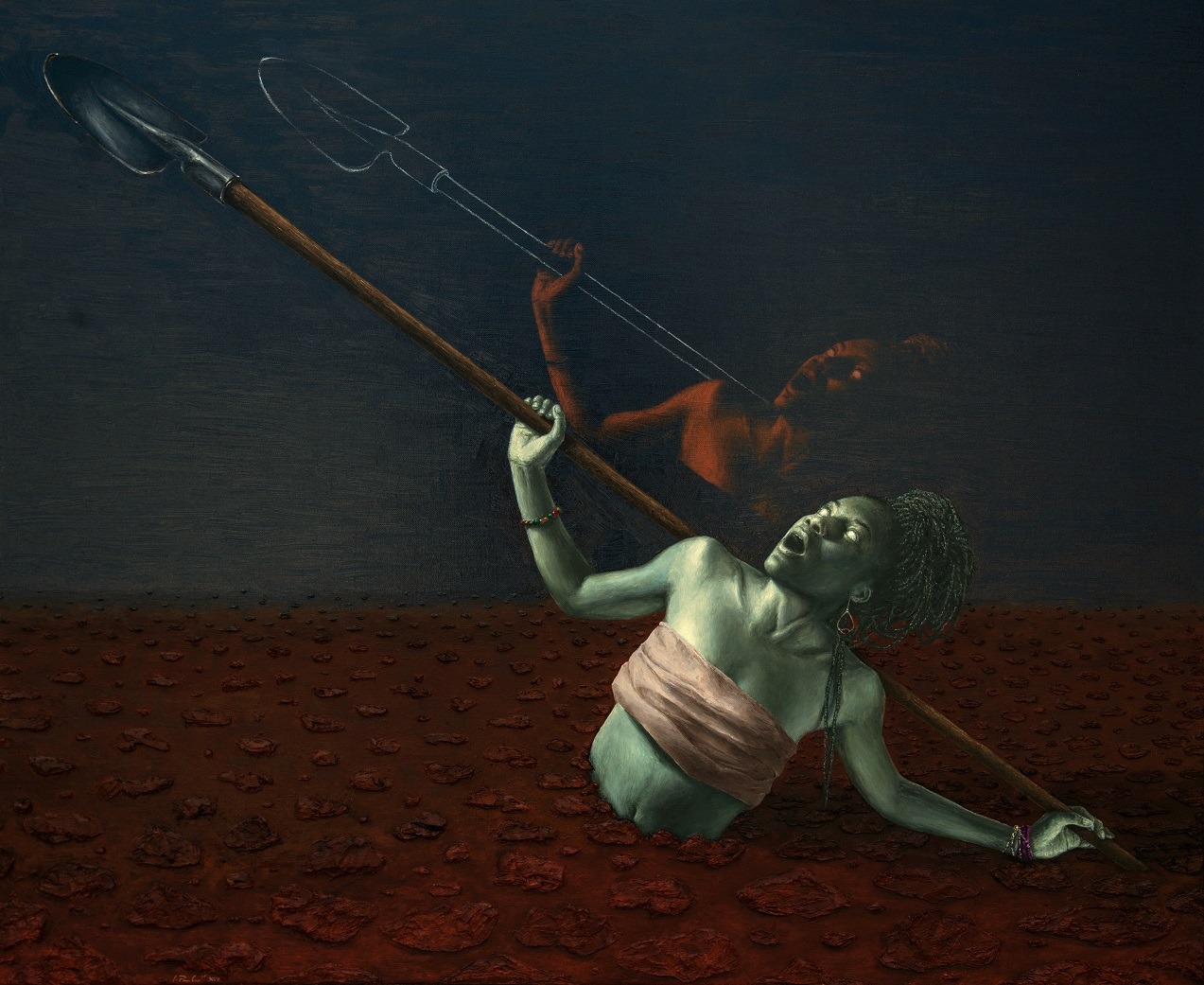 „O beata solitudo, o tu sola beatitudo“
I remember the inscription discovered on a small Venetian island of Torcello, speaking about the blessing or blessings of solitude. As I can ever more often hear questions about the sense of the so called easel painting, I find the answer in the blessing of solitude, which is synonymous for the encounter with one’s self. It means that there are as many answers as there are artists and even more; one of the most plausible answers can be found in the New Mythology, by the young painter Ivan Paulić, who, in his encounter with himself, opposes the meaninglessness, the matrix without an aura. If we define the space of Paulić’s painting (as we originally perceive it) as a sphere, one level away from infinity, there, halfway to infinity, there are the same, yet different characters determined by old iconography, with new attributes of “ectasy”, from beauty to power and misery, painted in the ”old way”. The artist has experienced the theme, motive and the way of painting.
It means that Paulić opposes the matrix without an aura, for, what is the „Bildung ohne Bilder“, archaeology without photography, myth without an aura. What has remained “the day after”, after the post-modernism (to artists in general and those interested in and wishing to speak about art)? What has remained but floating in the area of possibilities, where halfway through it we bump into or find more or less re-modeled myths transformed into archetype. Postmodernism is also called the cemetery of possibilities, the cemetery of “the optimal projections of avant-garde” (Aleksandar Flaker). Throughout the 20th century these gave rise to the versions of style, as well as “isms”, new methods and technologies determined the inflation, the range of impossibilities… All of this until the moment when Paulić went behind the easel, elaborating his idea for a new or for his first painting. This is, in fact, a metaphor aiming to point out the experience of the myth in painting, from Caravaggio to Balthus. In the time of “the blessing of solitude”, he opposes the iconographic piles, the amassed images on the repositories of the postmodernism, which sealed the door of cognition on the pretext of mass creativity. Paulić, on the other hand, opens the door. He uses images from the postmodernist repository and all his characters and situations (Mars, Aphrodite, Bacchus, Christ, toilet seat (cro.-shell), 21st century ball-point pen). Either considering them as a whole or analyzing them in detail, they are always double characters, with elevated heads, open mouths, with the attributes of passion, the attributes of the activity they perform, of what determines them in their everyday life, faithfully determined, as in myths themselves. Paulić’s anachronistic creation expresses both an image and cognition. The inscription on the gable cannot become a slogan: „O beata solitudo, o tu sola beatitudo“.
Paulić defined his path of a “cosmic walker” by extending his studio to the street, to the architecture of daily life. Paulić’s paintings are characterized by matrix and aura themes with a wide range of meanings, expressed through comments ranging from contemporary myths to multiculturality and back to the interpretation of mythology as cultural heritage. In a recognizable sequence named Modern Mythology, turning a retrospective glance towards the silence of cognition, Paulić enters the history of contemporary art as an artist enchanted by classical myths, which he elaborates within the framework of real life experience. He enters the holdings of the Imaginary museum (Malraux) with paintings that summarize an archetype, ancient myths with all their re-interpretations, the myth about painting. This myth exists and is contained in a perpetual looking back for aura.