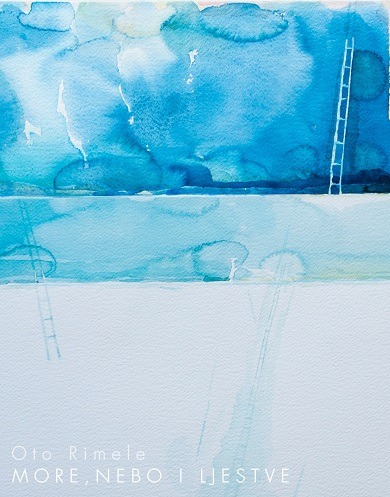 A series of twelve watercolor sheets entitled “Sea, Sky and Ladder”, realized in August 2020, was created as an intimate apotheosis of feelings, reflections on nature and the place of man in this wonderful all-encompassing reality of the Universe.

It is important to be aware that the message through the display of nature allows the viewer to establish contact with the properties of the Universe, which are able to create different and completely new temporalities and construct specific mental spaces. A significant aspect of this type of Rimele’s research is manifested in this cycle in the form of existential necessity, the longing of the individual, and the veil of romantic melancholy. The presence of light scattering through transparent layers of applied paint, traces of water movement and activation of the space of “gaps”, are the basic characteristics of the creative relationship when the artist builds an entity of watercolor reality.

Rimele’s confrontation with the landscape is actually an entry into those dimensions of reality that through the scene – where Heaven and Earth merge in a horizontal line – offer the viewer contemplation, confrontation and also transitions. Rimele’s depicted scenes are dramatic, as the author focuses on depicting moments that lead from the realm of a static and recognizable landscape into a dynamic and intimate experience of the time of Transition and Transition. In his works, he moves from the universal to the individual and vice versa, because our personal entities and decisions are the building blocks of this broadest whole to which we belong. Rimele says, “Our individual actions and thoughts are also always committed to the omnipresence of the Universe. And the Universe (Universe), despite its apparent immobility, is possible, alive and active because of the uniqueness of the individual meanings of individuals, and each of us contributes in some way. And that counts. “

Dr. Marjeta Ciglenečki recognizes artistic sublime communication with the individual as a bridge that gives the viewer an inner insight: “Many of Rimele’s public presentations can be described simply as beautiful, if, of course, we follow Plotinus’ interpretation of Beauty and together observes. “

Oto Rimele is a full professor at the Faculty of Education in Maribor. In addition to painting, he is engaged in graphic design and scenography. He was also involved in music and, along with Zoran Predin, was one of the founders of the new wave rock group Lačni Franz and Laibach, and Sokoli.

In 2016 and 2017, he participated in a group exhibition in Paris at the Carrousel du Louvre.

The motif of the Ladder and the Transition was presented by the painter in a series of 12 watercolor sheets called Jacob’s Ladder, which was presented to the American public in July 2019 at the DDA Pratt Institute Gallery in Brooklyn, New York.

He is the winner of the highest recognition in the Republic of Slovenia in the field of culture for 2003, the Prešeren Fund Award, for the exhibition “Illuminations” set up in the monastery church in Kostanjevica.