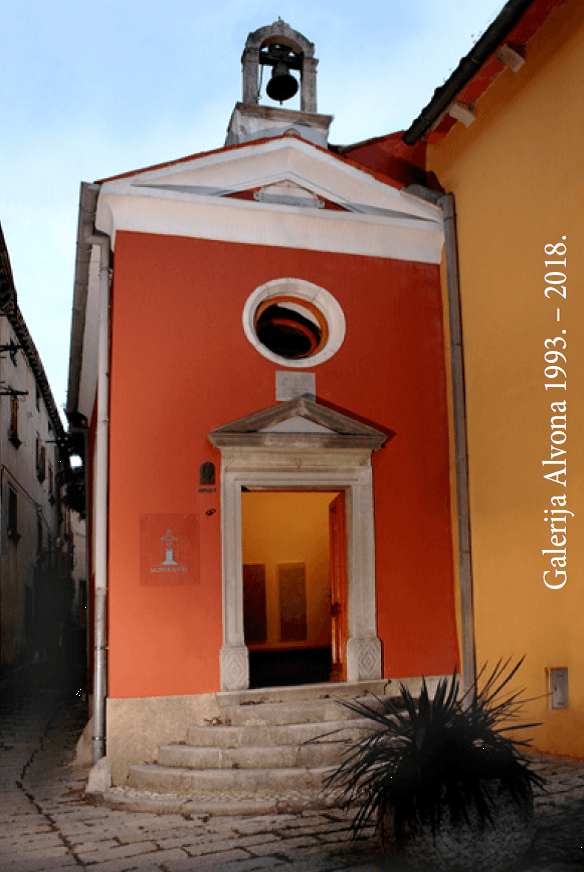 It was 1991. The Croatian War of Independence was already under way. Every day TV broadcasts and newspapers were filled with horrible scenes, among which those featuring destroyed religious buildings. It was probably because of this systematic and permanent destruction of Croatian heritage that Vinko Šaina, at the time known as a visual artist from Labin participating every now and then in the organisation of other artists’ exhibitions, decided to renovate, in his home town of Labin, with his wife Alis and mostly at his own expense, the dilapidated small building in the old town once used as a church dedicated to Our Lady of Mount Carmel. Mount Carmel in Palestine is the place from where the prophet Elijah defended God’s law and where during the Crusades, in 1155, a crusader from Calabria, Saint Berthold, founded the Carmelites, an order of the Roman Catholic Church whose patron is Our Lady.

The connections between the renovation of Labin’s small church of Our Lady of Mount Carmel and the original Palestinian topos may be fortuitous, but there is no doubt that they are also very clear, which makes us think about all the symbols identifiable in this case: during a period of war and hardship, the Šainas started to renovate, with great sacrifice, a dilapidated church, only to save a cultural heritage monument and to give it a new purpose by transforming it into an art gallery with which they continued to score their personal cultural victories, as well as those important for Labin, Istria and Croatia.

After the completion of these complex and challenging renovation works that lasted two years, the new art gallery was officially opened on 16 July 1993 with an exhibition of documents on the basis of which the project had been carried out and photographs documenting everything. During the first three years, due to the war and the lack of financial resources, the programme of the gallery was modest and basic: in those years, only local projects, exhibitions of works by Labin’s artists and portfolios of prints were presented here. Since 1996, many Istrian, Croatian and international artists have had here their solo shows. In the same period, the gallery’s activities moved into a higher gear and the gallery became a very popular and respectable exhibition venue whose importance soon outgrew its local boundaries.

Labin to Vinko Šaina represents, as Berislav Valušek wrote in this artist’s monograph, the punctum fixum (stronghold) and punctum saliens (axis, essence). He returned to his home town after having completed his studies at the School of Applied Arts in Split, in 1972, and soon became an active member of the group of Labin’s artists known as Labinski atelijeri. At the same time, he participated in almost every one of the many art events that were held then and thanks to which Labin became known as the “town of artists”. Šaina was well aware of the vivacity of Labin’s art scene and its many visitors, which is why, in addition to being an artist, he started to be active also as a gallery manager. At the time Labin already had small private galleries, but in most cases it was a small space within an art studio at street level where only the works of its owner would be displayed. The need for a privately-owned art gallery that would represent important artists not under the diktat of an institution, but exclusively in harmony with the spirit of cooperation and the artistic vocation, turned out to be Labin’s bare necessity. That was, for a period of time, the role played by the Re Bar café, whose main function was, however, that of a catering establishment, while hosting art exhibitions was its secondary purpose, as was the case with a few other Labin’s cafés, which is highly commendable because these establishments made a significant contribution to the creation of the “town of artists”. Šaina had been passing every day by the dilapidated small church dedicated to Our Lady of Mount Carmel located in front of his studio before the moment when the idea to renovate it appeared as something that needed to be done. This was the beginning of this gallery, whose activities, as it is obvious today, 25 years later, have brought pride to the owners. The aims of this gallery’s exhibition policy have been to present, through solemn solo shows, artists from Istria, Croatia and abroad, to promote the works created by Istrian artists and exhibit them at art galleries ran abroad by fellow gallery operators, as well as to publish portfolios of prints and monographs. Alis and Vinko Šaina have been successful at all of the above.

According to statistics, the gallery organised more than 150 exhibitions, among which 126 were held in its premises, and was hosted by important partners in Croatia and abroad. In addition to the large number of catalogues, brochures and postcards as supporting material printed for each exhibition it organised, the Alvona Gallery’s signature can also be found in a portfolio of prints and three monographs. At the same time, its bibliography consists of more than 500 units, many of which were written not only by Croatia’s most important critics and writers, but also by internationally renowned art theorists.

What ended up distinguishing the Alvona Gallery from similar art galleries is the selection of artists whose works are exhibited here, the promotion of Istria’s art outside this region’s boundaries and the selection of critics who write reviews and participate in the gallery’s programme. It was in such an environment, the description of which can be summed up as “professional partnership between friends”, that the gallery started with its numerous heterogeneous activities, working since the beginning on its holdings consisting of works created by artist hosted here – each of them left one work to the gallery. Thanks to such an approach, the Alvona Gallery started an activity common among museums, which led not only to the collection mentioned, but also to the gallery’s various publications and ample documentation.

However, what encouraged the Šainas to be persistent and not to give up in this hard and financially inconvenient line of work, which has been their job for twenty-five years in a country in which there is no art market or adequate laws concerning the activities of art galleries, was, without a doubt, the exceptionally positive atmosphere surrounding the gallery. The openings of almost all exhibitions have been attended by a very large number of visitors. What characterises these events is a spontaneous and relaxed atmosphere, as well as intensive interaction and cooperation with artists, critics and gallery managers, friendship and togetherness that continued over time and survived. All this helped this small and warm gallery to proceed with its job. The Alvona Gallery will celebrate its silver wedding in the most ethical and, professionally, the most appropriate manner – by presenting its abundant holdings and all its activities. There is one more thing we should do after the party: evaluate all the gallery’s activities and put this venue where it deserves to be – on the pedestal among Croatia’s private art galleries, with the observation that enthusiasm (the one encountered in the Šainas is an exception) does not last forever and should be replaced by a well-functioning market and laws.